About tapers and puppies 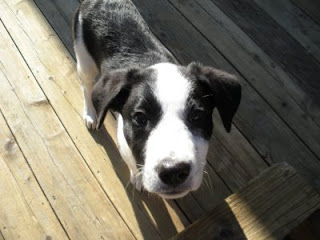 Tim and I adopted a puppy from the local SPCA and named him Luka. Based on his teeth, he's estimated to be about four months old. Best guesses from the SPCA, vet and a dog trainer is that he's got some border collie, lab retriever and pointer in him.

We brought him home only 12 days ago and what a time it has been since then. Even though we thought - and even were told - that our preparations were solid, we underestimated what it means to adopt a puppy - especially one that has the energy levels that this guy does.

We're lucky in many ways. Luka is absolutely adorable. He has a ton of energy, is excited about everything that is going on, and is very affectionate. He seems to have been very well socialized to people and dogs, as in that he's curious and excited to meet both.

He was already used to being in a crate at night and for periods during the day. As a high-energy puppy he does not yet know it's OK to have a nap when he is tired. So we put him in his crate during the day in between regular walks and playtime in the backyard. He usually protests for about two seconds before passing out on his back with his paws in the air.

He was not yet house-trained and peed to his heart's content in our family room during the first afternoon. With help of the crate, tight supervision and very frequent pee breaks with lots of praise for doing so outside he has learned very quickly that inside isn't the place to lift his leg.

Luka is a quick learner in many respects. And he forced us to be quick learners too. Like most puppies he loves to bite. We tried the yelping, and walking away from him to teach him biting isn't a good thing. But his biting - along with jumping and humping - is also a manifestation of his attempts to dominate us.

With the help of a local dog trainer, we got in touch with our Alpha side and have adopted a zero-tolerance to his biting. And this has improved his behavior markedly in the last few days. As Cesar Millan recommends: exercise - discipline - affection.

He gets plenty of exercise, and we have now also learned skills that help to teach him discipline in a positive and encouraging way.

As for affection, Luka absolutely loves to cuddle, belly rubs or any rubs really.
He'll sit on your lap while he's playing with his bone, Kong or other toys.

hello. my name is Christina and after coming across your blog, our lives at the moment mirror each other all to close. my husband and i just completed our first tri-sprint in Athens Greece this past weekend and are hooked to the sport. we also just adopted a new puppy (about mo's old) that seems to be a boarder collie/lab mix. i have so many emotions on how i can focus on my sport, work, and be a good parent to this new puppy who has so much engery. we have also been glued to ceaser milian's shows and are getting some help from a few trainers. i would love to share some tips - about the dog and the sport. thanks for sharing your stories thus far!