Superb signing at Hooked on Books

This morning I did my first book signing at the Hooked on Books store in Penticton, two days before Ironman Canada is held here. The store's owner, Judy, was very accommodating and extremely organized.

When I dropped by yesterday to introduce myself in person after we had exchanged emails and spoken on the phone, she had asked me to leave four copies of each of my three books (and a copy of A Work in Progress: Exercises in Writing sold immediately yesterday afternoon). When I came in this morning, she had organized my books in two separate prominent displays at a prime location in the store, one being the Local Author section and the second being a separate table for the two visiting authors of the day. (She was hosting another author later today.)

At the front of the store, near the entrance, in a well-positioned corner by the window she had a chair and table ready for me. She offered me a tablecloth too, but I had brought my own. I'd arrived 20 minutes early to set up that table, with the maroon tablecloth and a display with stacks of my three books, as well as two standing photoframes with 5x7 images of my book covers, a printout of my bio plus photo on A4-size photopaper and also a printout of my three books, with short description, price and front cover image on a second piece of A4-size photopaper.

I'd brought a stack of my business cards that have both the cover images and the titles of my books on them, plus my email and website address. I'd brought enough pens, in red, blue and black, and displayed two issues of IMPACT Magazine in which two of my articles as well as my review of two pairs of running shoes were featured. 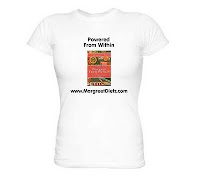 I wore a Powered From Within t-shirt and nice jeans, and brought my Running Shoes Are a Girl's Best Friend sweatshirt just in case I got cold. Of course I didn't - it's still summer in Pentiction - so I draped it as an extra display on the chair behind my author's table. Having read advice to not use a chair during a signing but to approach and talk to people instead, I planned to do that.

Determined to simply focus on saying 'Hi' to people coming into the store, or walking by it, and asking them if they wanted to learn more about my books, I did exactly that and met some great people this morning. And some of them bought my books, too, for which I am truly grateful.

I celebrate every sale and am absolutely thrilled and honoured that some of the people today bought more than one, even all three, of my titles. It really means a lot to me, so thank you very much.

My signing today lasted two hours and I enjoyed every minute. It was a major milestone for me as an author. It took me until May this year, and the publication of my third book, to work up the courage to first approach someone personally with my books - the head of my local library and the owner of a local bookstore.

While I believe that my books are well worth reading and/or buying, I was worried that my choice to self-publish (I have yet to approach an agent or publisher) meant a library or bookstore would not consider buying or stocking them respectively. That day taught me I was wrong on both counts, with the librarian immediately acquiring a copy of each and the store owner equally happy to put signed copies of each on consignment in the local author section.

Since then I have approached other librarians in person and via email, and my books have been accepted into libraries in four countries, an amazing leap in just four months. And that is exactly what today's book signing was all about too. It was about learning that I can approach complete strangers with my titles and tell them about my writing. And meet some great people in the process.

One woman is doing her first Ironman on Sunday, and I am so excited for her. Another had just run a marathon last week with her husband, both qualifying for Boston, and they were now volunteering at Ironman Canada so that he could sign up for IMC 2011, which would be his first Ironman.

I also met the organizer of 24-hour MTB races, who was doing his second Ironman this weekend.

And I met a woman who was a writer, editor, marathon runner, musician too AND shared the same name to boot, with an Ironman-racing partner who was racing his fourth Ironman this weekend, after having raced in Lake Placid, Frankfurt and Coeur d'Alene.

The first person I spoke to today was a gentleman who told me, after reading the covers of my three books intently and - seeing my photo on the cover of Powered From Within before my recent hair cut: 'You look better with long hair'. He told me that he had written a book in the 90s and self-published it. He told me it was very expensive, and said he'd paid $3000 for 50 copies of his book, after having paid another $1500 and $700 for editing services.

His book was a family history, he said. Coming from Russia, he grew up with seven sisters and seven brothers on a Saskatchewan farm. He said his parents had no longer been around to help with the memories, but having so many siblings did. I wrote down the CreateSpace.com website address on one my business cards and handed it to him, saying just in case he'd like to publish his book again. He said he just might.

The fabulous Hooked on Books bookstore owner, Judy, told me after the signing session to let her know when I was next in town so that I could do a reading of my books and/or a talk. And she's right, I am ready for that next step of authorship.

At the end of my signing, I packed up my things and left five copies of A Work in Progress: Exercises in Writing at Hooked on Books, as well as four of Running Shoes Are a Girl's Best Friend and another four of Powered From Within: Stories About Running & Triathlon at Judy's request.

Tim, who'd been wearing a black Powered From Within t-shirt all morning as he wandered around the expo and chatted with various people there about anything and everything Ironman-related, came to meet me at Hooked on Books. We dropped off my supplies in the car, and then went to a running store nearby because Tim wanted to get another pair of goggles that were on special.

Outside this store I met Lisa Lynam, author of Triathlon for Women which she was offering there. We had a great chat and exchanged some experiences and business cards. Her book was published by Meyer & Meyer Sport, which has published many valuable sports titles.


Tomorrow, Saturday Aug. 28, I will be at the Penticton Downtown Community Market along Main St and would love to see you there!