A record week of running. Again.

It didn't start out so well, as I still seemed to lacked energy initially; last Sunday I had cut my long run short, from the planned 32K to 24K, because I felt a little off. Not sick enough to skip the session entirely but even the shorter one had been a struggle.

I rarely skip or cut short long runs; they're too important and I like doing them. But last Sunday even 5:30 per K seemed like hard work, whereas recently a 5:00 per K average has been comfortable.

On Monday, I had a double session, with 10K in the morning followed by 6K in the afternoon, both at recovery pace. I felt better than I had on Sunday.

Tuesday I ran 16K in 84 minutes; the goal was to run at a pace that is between that of my long runs and recovery sessions. "Felt good, not superbly energetic but not too bad either," the notes in my diary say. 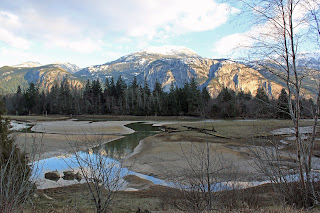 Wednesday had a 24K session. At about 5:10 per K (the slow end of my target pace for these sessions), again I lacked energy, even as my ECCO BIOM shoes made me opt for a beautiful route along the Squamish Estuary and the Spit that offers spectacular views. 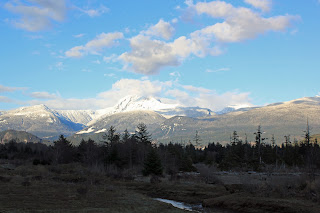 Finally, on Thursday's 11K recovery session, I felt the spring in my step return.

Just in time, as Friday had a 19K run that included 10K at half marathon race pace.

I decided to run it around the track. Tim and another local runner agreed to join me for part of the 25 laps, even as Friday brought wet snow which turned the local Don Ross dirt track into a very soggy experience. I left at 3:25pm to run the 9K from home to the track to warm up, and was soaked by the time I arrived there.

I was so glad to have company for this session. I ended up running the 10K in 41:54, which I was stoked with given the conditions. It was a great confidence booster, especially after the experience of the previous few days.

Saturday had another recovery session, also 11K, which I enjoyed.

Sunday brought my longest run in 3 1/2 months, at 35K. The conditions were absolutely perfect as Tim and I headed out on Sunday morning at about 9:30am. It was cool and sunny, with blues skies and snowtopped mountains. The road was dry and clear.

Tim and I ran the first 11K together, before we each did our own thing. We eased into the run along the usual out-and-back route. I reached the halfway mark 17.5K in 93 minutes, for an average pace of 5:21 per K, and picked it up gradually on the way home.

Feeling strong, I managed to wind up the pace to end up with covering the second 17.5K at 4:39 per K. It was a stark contrast from the way I felt a week ago.

This week has 128K and, if all goes as planned, a half marathon that I'll run at marathon goal race pace on Saturday.