The marathon, arguably, has proved a matchmaker for Tim and I.

Tim and I met in Toronto some time in 1998. We both worked as reporters for Bloomberg News. By then Tim had been based in Vancouver since mid-1996, after having started and run the Toronto newsroom for the five years prior to that.

I began in the Toronto office in April 1998, after having started my career as a newswire journalist in the Brussels newsroom of Bloomberg (then still: Business) News in September 1996.

We were colleagues working in offices on opposite sides of Canada and didn't have much to do with each other. However, we soon found out we were both, still fairly novice, runners.

By then I was preparing for my first marathon, set for May 1999 in Ottawa, with the guy I had recently started dating.

Tim was happy to share his experience via the Bloomberg message system, as internet email was not yet widely used, and I appreciated his advice. Before moving to Canada in 1998, I had run three races, all in Belgium; the 20K of Brussels, as well as a low-key 10-miler and 10K as I had only started running from scratch in 1996, or perhaps late 1995.

I ran another race in 1999 that was supposed to be a marathon distance in Death Valley but extreme weather, a sandstorm, forced the organizers to move the finish line from the open desert to the final part of Titus Canyon, making it something of a 39K event.

In June 2000, I moved with Bloomberg to Australia; the boyfriend stayed behind. Two colleagues, however, also got a transfer to Australia including Tim who arrived in July 2000. By then both of us had tried our first triathlons and swapped race experiences.

We each got apartments in Bondi. It was easy to share some of our training. We travelled to our first half Ironman in Forster Tuncurry together. While we did the same races, we certainly didn't race together. From the start there was a healthy and fun sense of competition; I was pleased to kick his butt in our first half Ironman, and have had to enjoy it ever since as I haven't been able to repeat the feat, at any triathlon distance.

In running, however, we have been much more evenly matched, though it took me a while to catch him in the half marathon and marathon, and I am still chasing him on the 10K distance; Tim improved his PB to 38:42 a week ago. 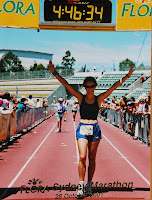 In 2001 I ran my second marathon in Sydney; by then we were dating and living together, and not just because dragging triathlon gear back and forth between two apartments had worn thin very quickly. Tim had registered for the marathon too but only to run the first 30K with me. I struggled in this race with a recurring theme; sore quads from 25K, and I finished in a net time of 4:44.

It wasn't until 2003 that we lined up together for a marathon. We were both fit, having finished our second Ironman three months earlier (Tim in another stellar time close to 10 hours). I had yet to run a Sub-4 marathon; Tim was looking to improve on his 3:29. As usual, we had no plans to race side by side.

Tim was a little ahead in the first 10K, then I went a little ahead. I was moving very well, surprisingly well - until the good old sore quads slowly but surely returned.

Somewhere around 32K the pain was so excruciating that I stopped, trying to stretch my legs as I cried - over the discomfort in my quads and over having to stop in a race that was going so well.

I was waiting for Tim to catch up and looked forward to his words of encouragement. When he ran by not long after, he did have a few words for me indeed; without breaking his stride he yelled: "What the hell are you doing?! Keep moving!"

So I got moving again. We passed each other back and forth over the remaining 10K, and it wasn't until the finish shute that we ran side by side across the finish line, both setting personal bests of 3:24.

In April 2007 I ran the Canberra marathon in 3:08, another big PB and breakthrough race that firmly sparked the Sub-3 marathon dream. Tim opted to watch this marathon from the sideline as he had just fulfilled his dream of qualifying for the Ironman World Championships in the brutal Ironman Malaysia two months earlier.

In July 2007 we both started in the Gold Coast Marathon, each racing this marathon for the third time. In his 7th marathon, Tim ran 3:10:38, a PB that still stands today as he has remained focused on triathlon. However, I have no doubt that it is waiting to be shattered, perhaps later this year. 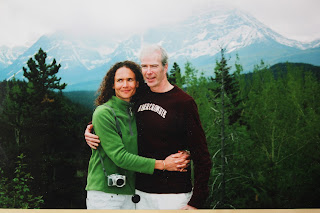 No one has been more supportive and understanding of my desire to run Sub-3 than Tim. He's been encouraging and patient as I have trained at a record volume in the past four months, with 1,951K under my belt.

Running an average 16K per day every day (or an average of 16.8K on the 116 days that I did run, taking into account the 5 days in the past 17 weeks that I didn't) hasn't always made me the most exciting or pleasant person to live with, yet Tim's support never wavers.

I could not spend my life with someone who was unsupportive of my need to run and my desire to compete and continuously challenge myself. Yet Tim not only supports but actively encourages it; he's wired the same way.

This morning he had emailed me a quote by Napoleon Hill:

Remember, the thoughts that you think and the statements you make regarding yourself determine your mental attitude. If you have a worthwhile objective, find the one reason why you can achieve it rather than hundreds of reasons why you can't.

When I cross the line in 2:XX on Sunday, Tim will be there and no one will understand better what the achievement—and his role in helping me get there—means to me.